I’m sorry to say that we had pre-conceived ideas about the town that weren’t exactly flattering, so to be proved wrong was a very good surprise indeed! 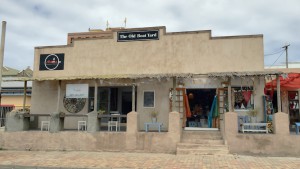 We headed into the old part of town down by the harbour where our first stop was Posboom Distillers. Pieter v/d Walt is the jovial owner and sells his beer to various local outlets and if he has stock to visitors to his brewhouse. He also brews mampoer which is apparently well-known in the area! The distillery is situated on the old train station along with an eclectic looking pub and restaurant that unfortunately wasn’t open so early in the day but worth a visit on our return.

A lot of the old buildings around the harbour have been renovated and converted into coffee bars, restaurants and original shops. The Old Boat Yard was one such building and we stopped for coffee at Sashenka which is also an art gallery. We had great coffee and a sandwich for a ridiculously cheap amount of money and the atmosphere was fab.

There are three other original and funky shops in this stretch and across the road another converted historical building houses the Mariaan Kotze Gallery. Her stuff is fairly alternative and fabulous – not everybody’s taste I will guess, but we fell in love with it and ended up buying a very unusual diptych.

The harbour itself has several restaurants (and take aways), including an old red London bus that serves fish and chips. It appears that more of the old buildings are being renovated as we speak, and this area appears to be a very vibey part of town. It’s well worth a visit and we’ll definitely go back!

Where to find it