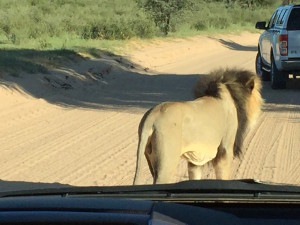 It’s not every day that a majestic beast of a black-maned lion decides to accompany you on a stroll through the bush, but that’s just what happened to us on our last visit to the Kgalagadi.

We were on our usual early morning game drive when we came upon this beautiful lion walking towards us in the middle of the road. Stopping at the side to admire him, he casually sauntered past allowing us (and a few other cars) to ride alongside him for 5 kilometres before he headed off into the bush. 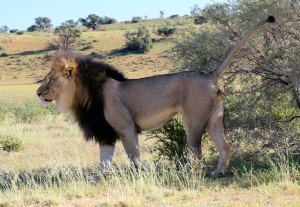 It was an amazing experience to be up so close and personal to this gorgeous animal. He was very nonchalant and not all interested in us or in fact bothered by our presence in any way. It led to many great photo opportunities especially when he was marking the various trees along the way. 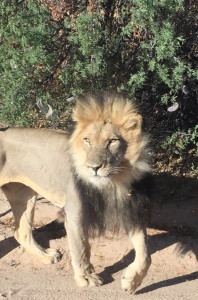 One of the fabulous things about the Kgalagadi is the relative lack of people and the fact that there were so few of us enjoying this treat. In one of the more popular game reserves this would have caused a traffic jam and we would never had been able to get so close to him.

There was something surreal about riding alongside this king of the veld and it provided a great high that lasted well into the day.

If I had to pick a Native American name, I can think of worse things than to be called than ‘Walking with Lions’ although Dances with Wolves, I admit would come a close second as wolves are a breed of animal that I would really love to see in the wild. For the time being I’m making do with a black-maned lion which is pretty special in itself.