I LOVE listening to live music and over the years have been privileged to see some of the greats on stage, so any chance that we have to head off into the hills for a weekend music festival of rock and blues and we’re off. The new favourite is Malkop near Lamberts Bay, on the west coast.

Early December 2015 saw the first one – organised on an already existing camp site on a local farm. It’s always great to be in at the birth of something like this and it seems that vendors and artists were excited to be there too.

Music – the food of love

There were some great bands performing, between two stages, and by the Saturday evening it seemed that everyone was really getting into the spirit and dancing up a storm. So much so, that the following day few of our party could walk very well as our legs were so stiff – a sign of a great time!

One of the sponsors was the West Coast Brewery who have just renovated a barn on the property, to use as their full time brewery, and will be open to the public outside of the festival. They had literally put the roof on the day before the festival weekend, but it’s a very cool place and serves fab craft beer! 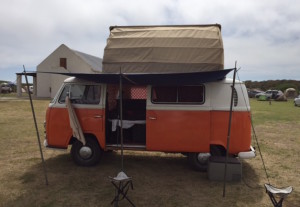 The camping space was great – obviously being the first festival, the numbers weren’t huge which meant there was plenty of room for everyone to have a large area to themselves. We decided to do it in ‘old school’ style and, along with friends, hired 1970’s VW camper vans from Cape Town and took a slow drive along the coast. 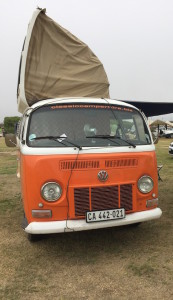 We had many waves, thumbs up and interest in the campers although one forgets what hard work it is without power steering and with no air con, electric windows, abs brakes or everything else we take for granted these days! But it was so worth the effort and made the camping extremely comfortable. If you feel like a nostalgic camping trip – it’s highly recommended and loads of fun – hire them from www.classiccamperhire.biz.

All too soon it’s Sunday and we have to pack up, having made lots of new best friends and promises to meet back there same time next year.

It’s absolute freedom to ‘dance like nobody’s watching’, camp in the open and listen to great music with great friends. It revitalises and energises like nothing else – therapy for the soul for sure!